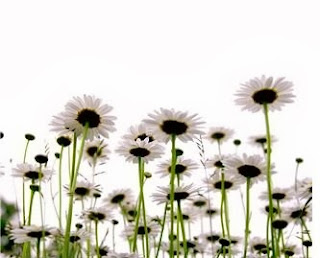 Note: the daisies have nothing at all to do with this story, I just love daisies.

Trivia is not one of my strengths; never has been and never will. I know many people love playing Trivia and there are Trivia games out there in the marketplace by the dozens. Trivia Nights for fundraising events have been popular now for several years. Thing is, if I want to know something, I BING it.
A couple of weeks ago Mr. Bruce and I went to our first Trivia contest. The CoxHealth Volunteers hosted the event to raise funds for an important cause, Addictions Recovery. We were happy to be part of this. That said, let me share some of the silliness of the evening.
Mr. Bruce got tickets for us and some friends. Of course, he was captain of our table and since he is auxiliary president, he called our table the situation room. There were six of us, but most of the tables had 8-10. Big thank-you to Georgia, Kimber, Mary and Jim... without you our situation would have been scary.
We had no idea what was going on when we walked in; not sure we did when we walked out. Evidently everyone in the room but us were pros at Trivia contests. The event chairperson made a few remarks, turned the microphone over to the MC and away we went. She ran through the rules so fast I was not sure that she caught her breath. Wait, did I hear that right, less than a minute at end of a 10 question session to make sure our answers were all written down? No way!
I noticed that several of the tables had been decorated and that some of the groups were in costumes in very colorful ways. One table had on purple derby hats and purple balloons tied to the table and chairs. One group came all dressed up in western wear with a big life-size cutout of John Wayne. They looked like they had walked off a movie set. I decided there must be a contest for the best theme, or something like that. Guess not, because nothing was mentioned. Of course, our table would have won the prize.. we were dressed as old people.
We might not have been the smartest table, but by golly, no one laughed as hard as we did. There were a few questions we were certain on the answers... WRONG! (Georgia was our Elvis expert; the MC gave the wrong answer to an Elvis question.) Mr. Bruce had this silly blank look on his face the whole evening. He said he couldn't hear the questions or figure out what his team was trying to tell him fast enough. Kimber and Mary were the smart ones at the table while Jim and I more or less just sat there.
One fun part of the evening was a 50/50 raffle. Tickets were sold cheaply, the winning ticket holder won half of the pot.. the cause got the other half. They had a silent auction as all events do. (aren't they getting old) I won the daisy basket of fresh flowers and gift-shop gift card. Thanks, Ginger for donating my very favorite floral arrangement.
I think everyone had a good time. I heard people say the auxiliary should have another Trivia night; bless them, those wonderful people raise a lot of money for different causes. Don't look for me though. I gave the only trivia answer I know... who invented TV dinners? Birdseye.