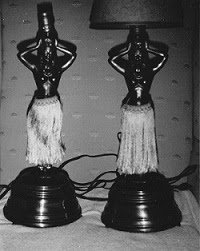 Several years ago, Mr. Bruce and I were selling things on eBay. It was great fun, we made extra money, and we did a bit of decluttering. We were selling things we no longer used. We also sold some of Jane’s things that we thought were of value to someone else. Many of those items were things Bruce just didn't know what to do with, and they always brought him sad memories.
One day Bruce remembered a set of old Hawaiian hula girl motion lamps that he had recovered from the attic. The story behind these is that they were a gift to Mrs. Brooks from a son, who was in the Navy during the early 1950s. Seems he sent these to his mother from Hawaii. Mrs. Brooks was a very proper woman and was a bit embarrassed to have lamps in the front room. She put them in the back bedroom and there they stayed until 1984, when the then elderly Mrs. Brooks was moved to a nursing home. At that time, they ended up in Jane and Bruce's attic. Fast forward to about 2001 when I entered the picture and I decided to take over Bruce's quiet domain and we entered the exciting world of eBay.
Bruce said, “Why don't you see, what these lamps are worth. Maybe we can get a few dollars out of them.” I did a bit of research on eBay and the Internet in general, finding several different opinions about the value of the lamps. I came across extremely interesting sites about hula lamps, including one written by a guy who who sells hula lamps in a shop in Hawaii. After reading a few pages, I noticed that he sometimes bought genuine old lamps. I sent him an email telling him we had a pair of lamps we thought were bought in Hawaii in the early 1950s. I gave him a bit of information like the manufacturer, condition, etc. I also wisely included our phone number. In reality, I did not think I would get an answer from him. I also thought the lamps were worthless; maybe get a couple bucks at a garage sale.
Here I am a bit fuzzy. I don't remember if he emailed us or call us right away. I do know, he asked if we had photo. At that time Bruce and I neither one knew how to use a cell camera, much less upload pictures, and email them to someone. Anyway, Bruce managed to get several nice pictures taken and we got to him somehow.
Imagine our shock and surprise when the we received a phone call from this nice man, who is the owner of the store in Hawaii. As quickly as possible, I gave the phone to Bruce. He asked Bruce how much we would sell the lamps for, but Bruce had no idea. Being the professional that Bruce is he calmly said, “I do not know the value, what will you offer?” The answer $600 each. After a long silence and a deep breath Bruce said, "That sounds about right."
Those 2 dancing girls were wrapped most carefully and shipped back home to their native Hawaii. Bruce and I not only did a happy dance,we did the hula.

My word for the month: Enthusiasm
Posted by MissDazey at Wednesday, September 08, 2010