Today I'd like to introduce you to some of my very favorite friends, my small collection of head vases. Maybe some of you remember the lady head vases that were so popular during the 50s and 60s. I am not exactly sure when they were at their peak of popularity; I do remember seeing them in the 60s. In case you are not familiar with them, these flower vases were made to look like women's head. When you put flowers in the vase it made a beautiful and fun arrangement. I think I remember that the flower shop I work in years ago had one or two, but not more than that at one time.

A couple years ago, I rediscovered these little girls on eBay, and of course bought one. I discovered the collectible ones are expensive, and I couldn't make myself spend the money for them. I bought several that had little chips on them that don’t bother me at all. They are still pretty.
It was then that I discovered a line of head vases, called Cameo Girls. These were created and designed by Debbie Kaspari for a company named United Design. The designer researched women's hairstyles, costumes, historical events then faithfully recreated each of the eras depicted. I think there were like 12 to 16 different ladies, who then were dressed as different characters.
I simply adore these little pottery head vases; I think I have 5 different one. At one time I was able to give them wholesale and sold them on eBay. Last week, I decided to buy myself one for my birthday. I bought “Abigail, 1858” called Amazing Grace. Each one of the ladies comes with a darling story. “Abigail 1858” is dressed in a day town dress of green. She is singing Amazing Grace and is praying as women did in the mid-1800s. 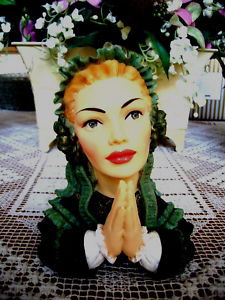 I did a little research online, and found out that the cameo girls have not been made since 2004. They were very, very popular for head vase collectors. There is an annual head vase convention held in Florida each year, and the designer Debbie would make a special limited edition for attendees of the convention. I wish now that I had bought more, because the price of the collectibles has gone up.
I have to tell you one other thing about my head vases. I have one sitting in each room of my house, and of course have them all named and talk to them. One thing that I just love about these little girls is they do not talk back, they do not tell me I'm wrong, they laugh at my jokes, and keep me company. Of course they don't mind if I am online blogging or twittering in my nightgown.
Remember the word of the month: Envision
Posted by MissDazey at Saturday, July 31, 2010