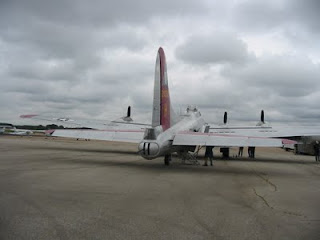 Last Friday Bruce had the thrill of flying in a B17 to celebrate his 74th birthday. He belongs to the EAA which sponsors these flights. The following was taken from the offical site:
Fly the Fortress!
EAA is offering historic flight experiences in its beautifully restored B-17G Flying Fortress “Aluminum Overcast.” This aircraft is an example of the American heavy bomber that helped turn the tide of battle in World War II. Fly a mission back in time and feel the might of this magnificent aircraft, just as those brave young men did more than 50 years ago


Bruce thought it very exciting that he could take this flight on his actual birthday, October 16. This event was held at the Olive Branch, MS airport, that is just south of Memphis, TN. The local EAA Chapter was the sponsor of this three-day tour. The official EAA crew flies and maintains the B17, putting on these events across the USA in many different cities.

We drove from home, Springfield, MO, on Thursday to the Harrah’s Casino in Tunica, MS about an hour from the airport. We went early and got the perfect parking spot directly across from the plane. I had a front row seat, and thoroughly loved watching everyone and everything. The members of the local EAA chapter were out polishing the plane; I swear every inch was gone over a dozen times. These guys were all carrying coffee and donuts, and having a good time, sharing stories and milling around. 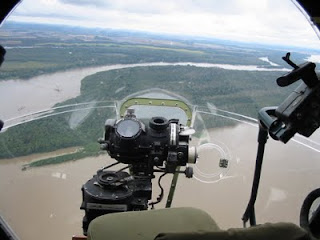 Check in time was 9:15, flight at 10:15; I think Bruce was first inline. The first part of the tour “briefing” and demo followed by the flight itself. There was 6 paying passengers, plus a 3-member crew on board for a 20-30 minute flight. After they were airborne, they were allowed to walk around, take pictures, and ask questions. Bruce still can’t believe what a small space the nose gunner had to work in.

From my vantage point in the car, it seemed everyone there were over 60...away over. I could only imagine the stories they were sharing of long past days when they were pilots or in the military, etc. One of the passengers was an old man that was using a walker. He sat outside and almost everyone went up to visit with him. Bruce found out that he had flown B29s in some war. Can’t you just imagine what he was thinking when the plane took off? Memories are so precious!

About an hour before the demo started, we heard helicopters overhead. Two military copters landed and out popped young guys in flight suits. They went through the old B17 several times and talked to the older men. They waited and watched the take-off and landing, then flew their copters off. (We didn’t find out if they were National Guard pilots or from what base they were stationed.) It was so touching to observe, the young HEROES of today visiting with the older HEROES of yesterday.
Posted by MissDazey at Monday, October 19, 2009